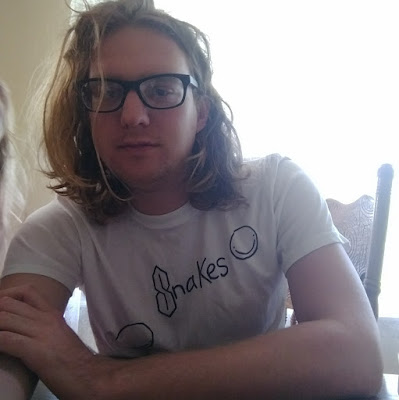 Josh Byron, a 22 year old filmmaker living in Brooklyn, NYC, creates familiar, deceptively simple short films that are catalysts for conversation. Picking up from different mediums and ways of making, Josh creates a language that is uniquely their own.

Their friends call them the "trans-Carrie Bradshaw" as their videos, vlogs, comics, and writings resemble the attitudes and obstacles of Sex and the City Carrie, but there is a personality - a whimsical, yet sincere charm.

Since we are used to being exposed to spectacle in everyday life, the idea of a video, a vlog, a picture being truth is looked at as a concept of something that is true until proven untrue. Josh is an artist that deliberately plays with the qualities of truth in video to start a dialogue about queer theory and being non-binary in the contemporary (really contemporary) world. As they casually introduce fictional concepts and dreamlike realities into their films, they create an environment and story that is comfortable, provocative, and smooth while breaking the convention of a vlog/video being straightforward and simple.

Here is a summary and preview of the 20 part short film series:

The hypersensitive, earth-mother, nonbinary hermit Joshua Byron is proud to release their newest work, IDLE COSMOPOLITAN, in conjunction with the unvanquished, incurable Artless Media.IDLE COSMOPOLITAN is a meditation on not getting married at 21, eating potato chips in bed while writing, and authentic arguments Byron has had with their exes “—–” and “—-“; it includes gay ghosts for the nonlinear-haunted folx. The series is contained in 20 parts, each detailing an encounter of a gay with another gay or a gay with a gay self. The work is PG and does include many folx in hideously cheap costumes with deadpan (dead) humor. The work does not purport to be about our current dictator. It does not purport to have a singular purpose, other than to seduce you. The piece swings through three acts, before the Queer World, the Queer World Advent, and the Eventual Escape to Some New Place. The mythology of the piece may or may not be fully espoused at a further date. The actors — in their collectivity and flubbed lines– were co-creators, resulting in a remix of an already dubiously vague odyssey. The main character is an indecisive millennial with a column and should not be emulated. Many trans folx, artists, academics, and non-artists participated in this lofi potential satire of queer “heartbreak and renewal”. The daily is as important as the rapturous in this diary-like endeavor.

Stay tuned for an update on Idle Cosmopolitan, an artist interview, as well as a vlog/blog post with the artist!

Hope you all enjoyed the first post! Thank you Josh!